The phone rang shrill echoing through the house. Hendrik its Zack, what are you and Cornelia doing during the December holiday?

Do you and Cornelia want to sail with us to Inhaca; it’s a two week trip.

Zack my brother in law and his wife Magda our best friends, bought a 40 feet Maverick a year ago and sailed it from Cape Town to Richards Bay. Their yacht is anchored at the Richards Bay yacht club.

During the past year Zack and Magda would fly down and go sailing once a month and we joined them on many an occasion, but that is another story.

I chatted with my wife Cornelia, she was stunned. She enjoys short trips but two weeks on the sea, never never!! After much coercion my wife gave up and decided to go on the trip.

It’s the second week in December. The weather pattern played along. It is ten a clock at night. The sail boat is packed. It was time for a safety talk. Zack and Magda shared with us all the do`s and don’ts. Both my wife and my eyes were big and there was a little niggling feeling on the stomach. We are not sailors, but we are willing to learn.

The engines purred to life, Richards bay harbour was basted in the last light. The sun was setting with a yellow red colour in the west. We would make turns during the trip. My wife, Zack, Magda and myself would take the watch alternatively. Each team took four hours on and four hours off. 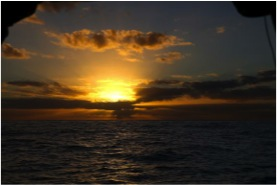 It was not long when Zack decided to lift the bow sail. What an amazing experience, the engines were cut and it was it was only the sound of the bow cutting through the ocean. It was pitch black, the stars looked close enough to be plucked. I sensed how small we human beings are sailing at night. It was time to sleep.

Four hours seemed such a short time, my wife woke me. It was time to go on deck. Safety first, I had to put my safety harness on before going on deck. Magda was at the steering wheel. I got such admiration for Zack and Magda. Both did all the necessary sailing courses and handle the yacht as if they have been doing it for years. The night breeze was chilly.

What a learning curve! We took turns and we learnt to watch for ships on the radar. What amazing technology, the APS system. It indicates all the ships as oblong shapes, if you touch the screen, it shows all the data for the specific ship. I strained my neck, visibility is not great. Now and then you walk to the sides of the boat to look if all is clear. I was astonished at how relaxed Zack and Magda were on the boat. The next day was a perfect day on the sea. 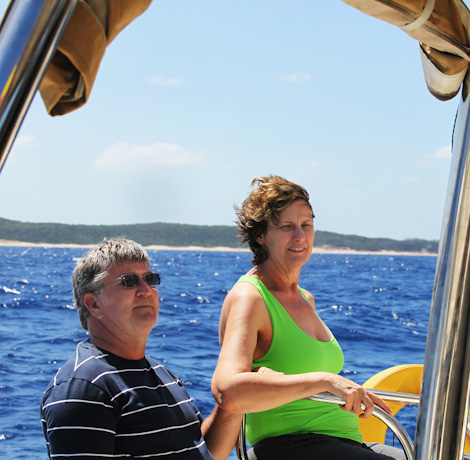 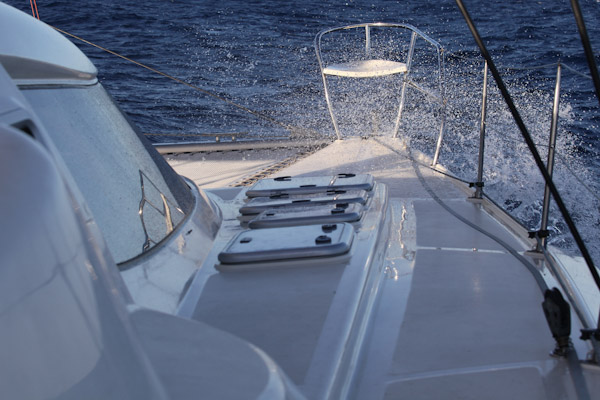 Two days later we sailed in at Inhaca. It takes half a day to sail to the port in Maputo. Then your nerves are on edge. Zack must manoeuvre the big yacht in a small space. Then the team run. The balloons must be spaced correctly. Special knots must be tied. 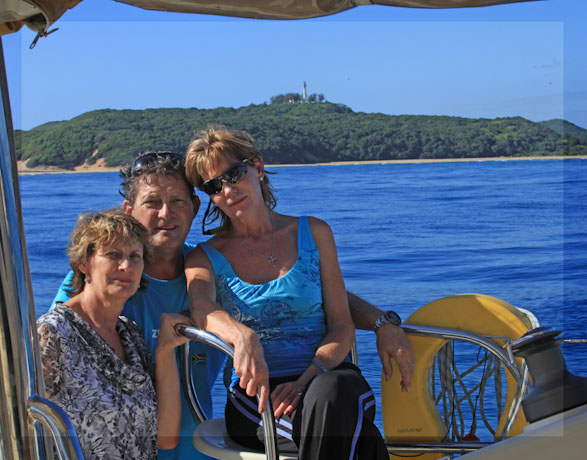 Al last tied to an old tug boat, no wharf space. Zack and Magda were off to clear us through customs. Around us it teems with life. Small fishing boats are coming into the small harbour. In the background some fancy buildings makes a fancy backdrop against the impoverished streets. The streets are filled with vendors selling anything from fish to beer. Cornelia and my wife stayed on the boat.

Finally cleared and we were off to Inhaca. Blue shallow waters, coral reefs paved the way. We made slow progress. We reached our destination, time to anchor.

Never n dull moment, at night we drifted. How ominous does it looked, we drifting onto the main land. Up anchor, we experimented with two anchors, but that gave us hassles with the current. It was a long night. It was time to set up base.

What an amazing time. Days were filled with lazing off, snorkelling in the beautiful waters of Santa Maria.

There is an area of two kilometre long to snorkel along. Within two metres from the side the water depth drops to 12 meter. We were amazed with the fish life. Zack found a spot where big King Fish hid next to a coral tower. What an amazing sight to see these big coevally in the clean waters. 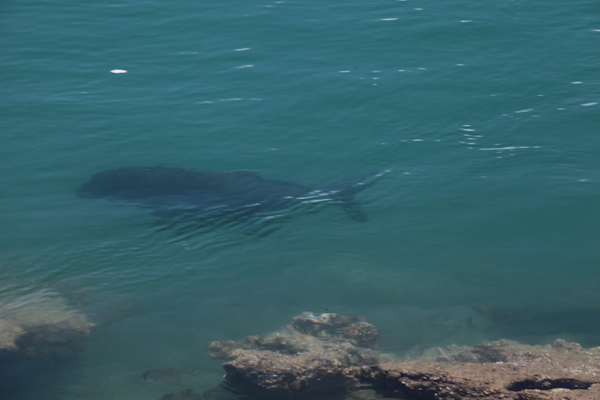 Zack and Magda explore the coasline by kayak and when we were not snorkling there is walking on the beach. 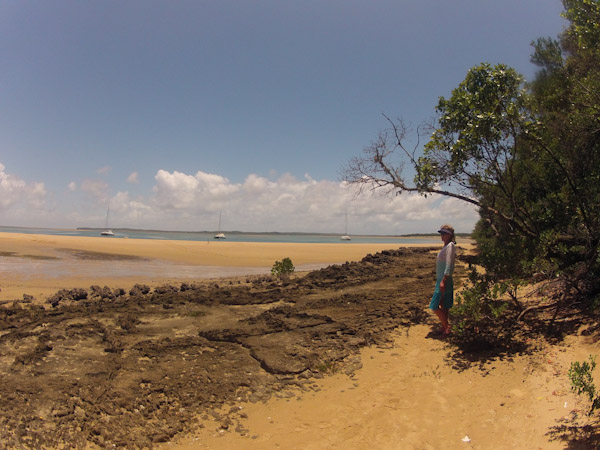 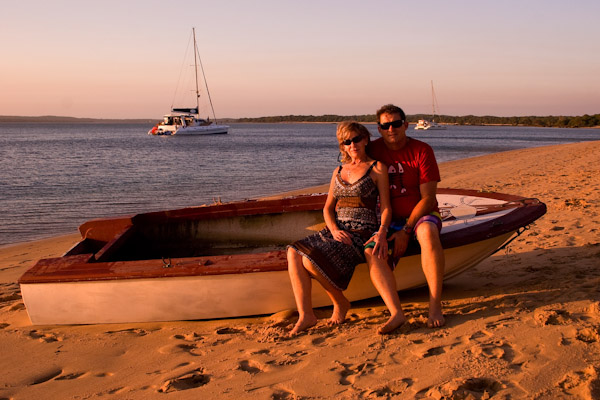 Zack even took us fishing on the rubber duck. He caught a Kingfish in the channel leading to the mouth. You always have some adventure. We were amazed how strong the current is in the channel next to Santa Maria. 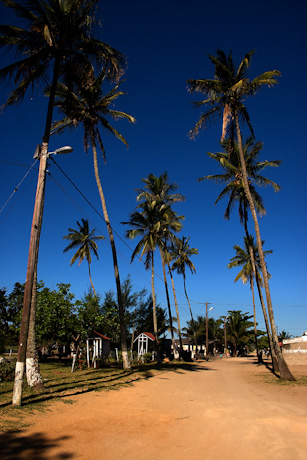 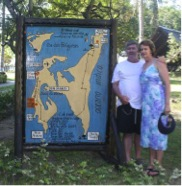 The local vendors sold from coconuts to colourful clothing. 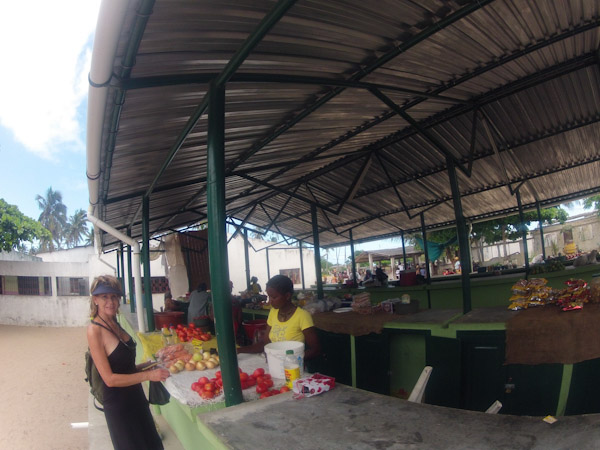 Never miss the Portuguese rolls baked in konkas. In a local restaurant we had chicken, the speciality of the island. We dressed up for the occasion.

Magda the perfect hostess treated us; you will not believe our Christmas dinner. It was a six star meal.

Each evening we had to lift the rubber duck out of the water, the enjin had to be taken off and placed next to the main motors. A Big operation, I was amazed how agile Zack is to get into the enjin compartment and then had to manoeuvre the duck enjin into place. Unfortunately theft is a big concern in these waters.

Fishing in front of the island was not as successful as I thought it would be. Zack tried all the tricks in the book and landed at least a Dorado.

All things come to an end and before knowing it 2 weeks sped past and it was time to go home. 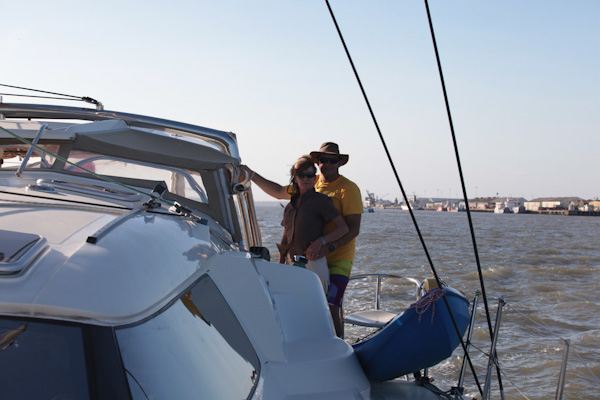 We had rough waters in the mouth of Inhaca on our way out. I was off duty and could just feel the tremendous rolling and bobbing up and down.

During the next day the weather cleared. “Swaerie time to try for Marlin again” Out comes the reels, leaders are checked. Harnesses are set. For the fun of it I showed my wife and Magda how they should fight a fish.

The next moment one of the big reels wined. It was chaos. Zack shouted clear the deck. All the extra rods were removed. Zack decided my wife must take the fish. Zack and his wife make an amazing team. She took the steer, Zack gave instructions.

What a moment in life, my wife is not into fishing. She was doing extremely well. I talked to her continuously and gave her water. After a long battle the leader was in sight. Zack took the leader and started bringing in then striped Marlin. The beautiful colours flashed in the blue ocean. I took photos. Magda kept the boat moving to keep the Marlin calm. 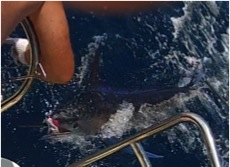 We estimated the fish at sixty five kilogram. What a blessing. Zack released the fish, a dangerous operation. Both Magda and Zack congratulated my wife with her Marlin.

The winds were favourable and our journey back was quick, 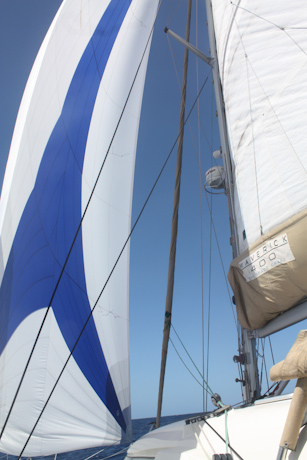 Zack and Magda you guys are an amazing blessing in our life. The two weeks sailing was one of the best moments in our life.