The settled weather required us to motor sail overnight from Turks & Caicos to Hogsty Reef. The only way you can explore this reef is in settled weather.  We arrived at 9h00 on the 19th February 2017. 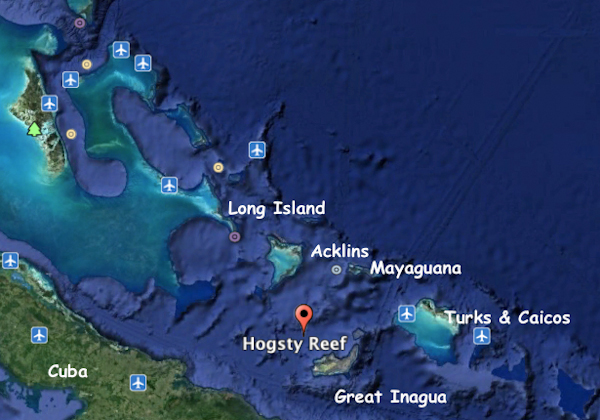 This is a location of many documented and unfortunate shipwrecks (more than 300 and as recent as 20 years ago).  We approached the reef with caution. The atoll is 4 miles long East to West and 2 miles wide North to South. The charts showed an opening in the reef from the west only. The anchored was dropped off Northwest Cay for the little protection the sand bank could offer against the ocean swells. It was a strange feeling to be anchored in the middle of the ocean. 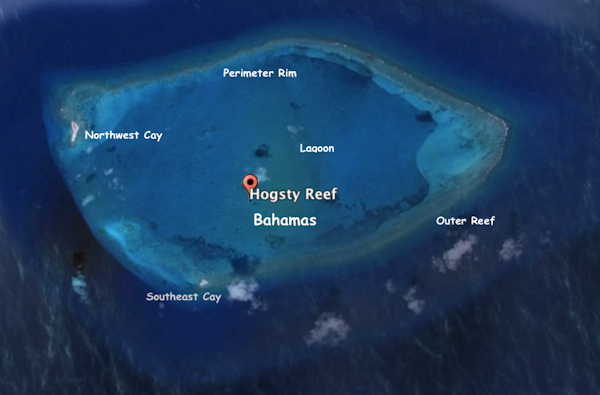 “Hogsty Reefis a uninhabited coral atoll located in the southern Bahamas. It is located between Great Inagua (to the South) and Acklins Island (to the North). There are just a handful of these geological formations in the Atlantic, whereas there are hundreds in the Pacific.

Atolls in the Caribbean are typically not volcanic in origin.  Scientists refer to them as “pseudo-atolls.”  However, they do have true atoll characteristics: an outer reef (fore reef), a perimeter rim (reef rim) and a central lagoon.  The outer reef starts in deep water with shallower portions subject to ocean swells that break around the circumference of the entire atoll.  The bottom depths around Hogsty Reef reach an incredible 1800 m.   Reef building corals start to grow in roughly 50 m of water, rising up to within a meter of the surface.  The perimeter rim contains both reef flats and islands.  Reef flats are shallow reef structures that are frequently exposed during low tides and subjected to heavy wave action.  Algae encrusted coral debris is plentiful here.  Waves around the rim of the atoll also form islands.  On Hogsty Reef there are two sandy islands in the perimeter rim.  Northwest Cay and Southeast Cay stand on either side of a gap on the western side of the atoll.

Southeast Cay, located on the southern reef rim, is less than 150 m long and 50 m wide and is about 2 m above sea level.  The Cay (or island) is surrounded by bands of beach rock and wrack (seaweed, flotsam and jetsam) that have been washed up by storms.  Essentially, Southeast Cay is a sand spit, with very little low, scattered vegetation. 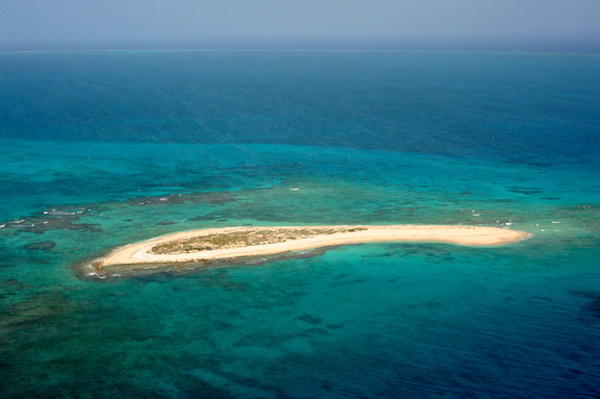 Northwest Cay, on the southwestern tip of the reef flat, is larger (~270 m long by ~65 m wide) and stands slightly higher at about 4 m above sea level.  The top of the Cay is covered in low, hardy vegetation, and the ruins of an old lighthouse stand tall on the small island. 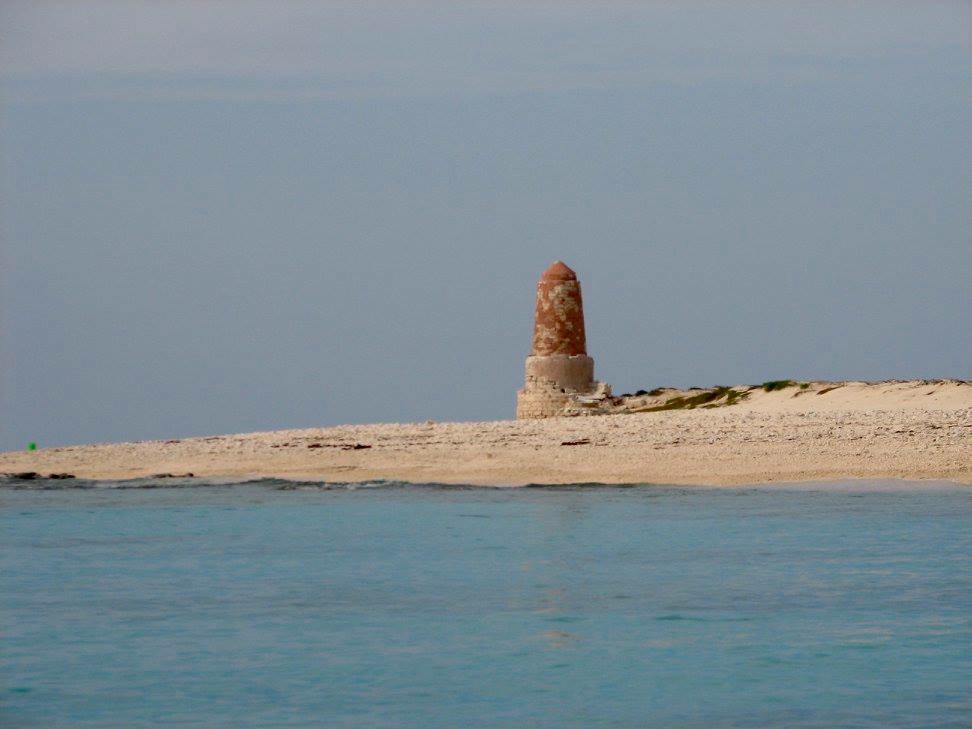 The Hogsty Reef lagoon is shallow, generally between 6 – 8 m, and measures approximately 8 km across at its widest point.  The lagoon is sheltered in comparison to the outer reef and reef rim and harbors several small patch reefs.” 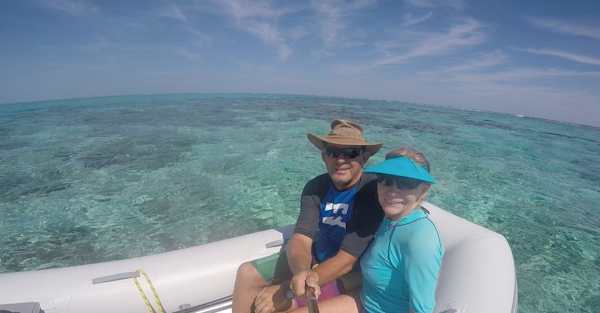 The settled weather allowed us to explore the reef on the inside with our dinghy. The lagoon was turquoise water, 25 feet deep over white sand. Absolutely stunning colors with all shades of blue and green! 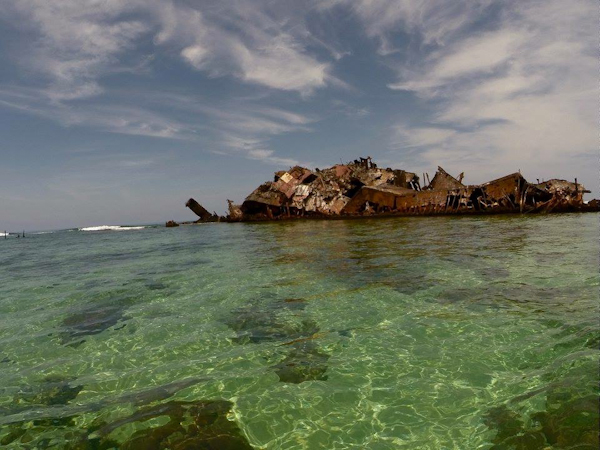 The large rock at the Northeast corner of the reef turned into a heap of rusted metal as you come closer. Totally rusted red and well on its way to being reduced to dust. The superstructure is caving in and the hull is broken.

“This is a Liberty ship named Trebišnjica  wrecked on the northern part of the reef 17 July 1963. These were made during World War II using a revolutionary construction technique whereby large sections of the ships were manufactured separately then welded together.” 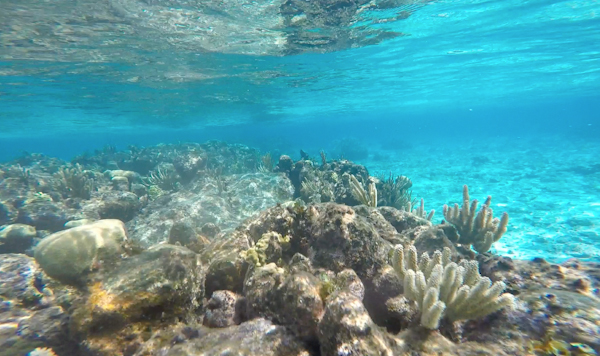 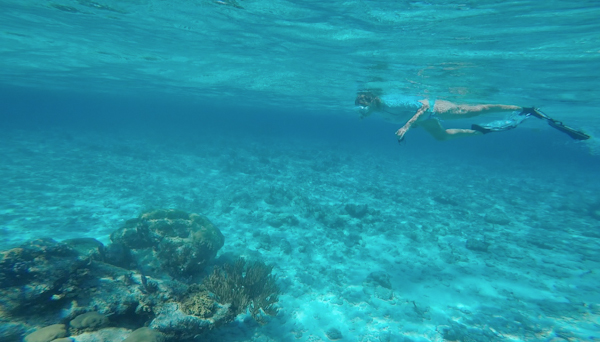 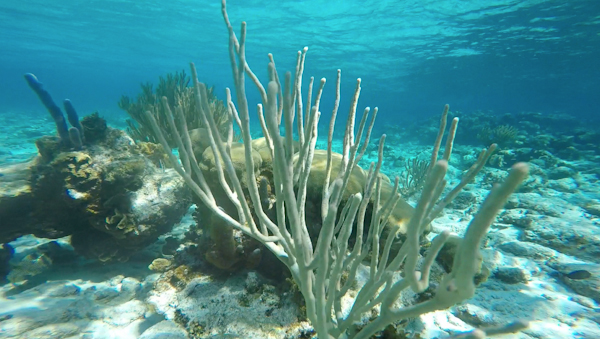 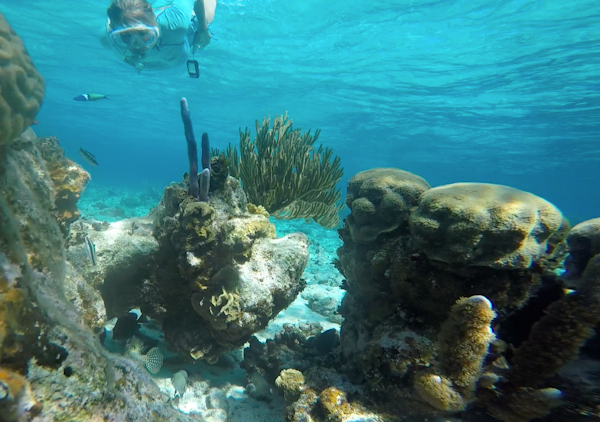 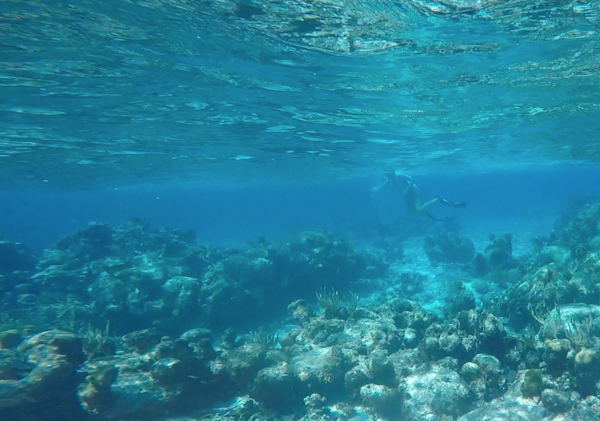 The lagoon was mostly 20–30ft deep with scattered coral heads. We snorkeled the north eastern reef.  The visibility of the water was mind-blowing. 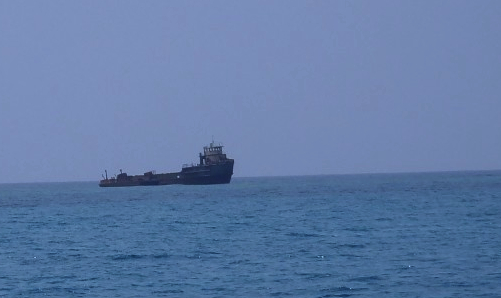 On returning to our boat we passed the second shipwreck on the southern part of the reef. From a distance it looks like an intact ship heading on a course of 142°. 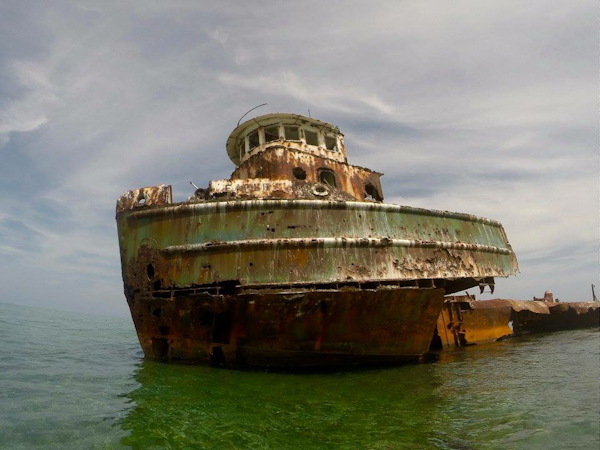 It’s much smaller than the Liberty ship – and looks like a small inter-island freight boat – maybe 120 feet long. The wreck appears to be much more recent and is in much better shape. The name of is wreck is: Lady Eagle.

On returning to our boat we noticed another sailboat has anchored next to us in the middle of now where. Lady Mary was a Russian sailing vessel with Andrea, Marina and there two daughters Anastasia and Lada. They were on there way to Cuba. That evening we spend on Vagabund learning lots about Russia. What a special family in such a special place.

The small window of settled weather was closing during the night. Vagabund’s anchor was lifted at eleven that night allowing us to round Acklins Island before the north easterlies were setting in early the next morning.

Hogsty Reef is one of those places you always will want to return to.  Even thou we lost the majority of our photo’s in some weird way we were so thankful to have had the privilege of visiting her and have the excuse for going back the moment the opportunity will allow us to.