“This is one cay a visitor has heard about long before visiting the Exumas. Norman’s gained its notoriety during the late 1970’s and early 1980’s when it was used as a base for a cocaine smuggling operation by Carlos Lehder.  Norman’s Cay today reflects little of Lehder’s lawless days except for the ruins on the south end of the cay and the plane that rests in silent tribute at the northern edge of the anchorage. “ What is left of the ruins in the south end of the cay. 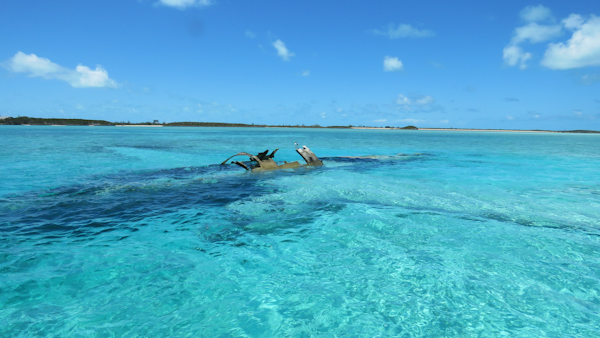 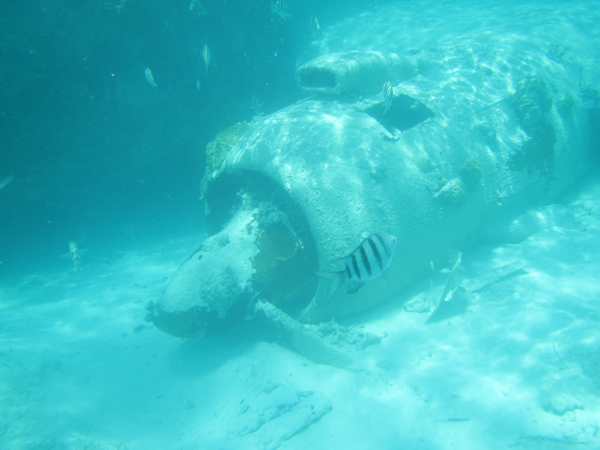 The plane in the northern end of the anchorage Map of the park

“The Exuma Cays Land and Sea Park beginning at Wax Cay Cut in the north, stretches southward some 22 miles to Conch Cut. The boundaries, due to the lay of the cays, are anywhere between 3-5 miles off the land in either direction. This national park is without a doubt the most pristine and the most beautiful area in the Exumas. There are no commercial developments within the park and the only inhabited islands are privately owned. “

“Shroud Cay is an uninhabited cay protected by The Bahamas National Trust and is an archipelago of cays and rocks surrounding a shallow tidal mangrove salina which serves as a unique nursery for conch, lobster, sea turtles, birds and many varieties of fish.” The northernmost creek known as Sanctuary Creek winds its way into the interior of Shroud Cay before it comes out on the Exuma Sound. 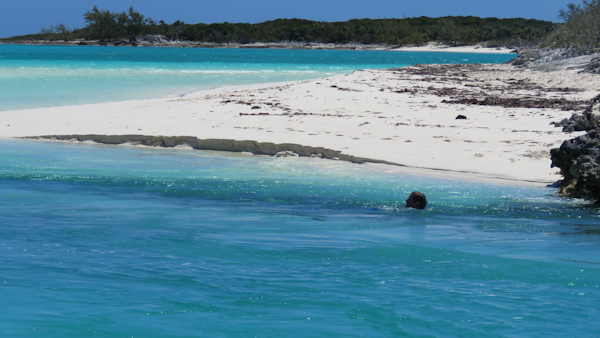 The eb tide is ripping out to sea from the mangroves. At the edge of the sea this current is running at its maximum speed at a couple of knots. The ideal place to play in the outgoing current. We swam out close to the water edge using the counter current and then drift sideways until the main current propels you out to sea. Again and again ….. 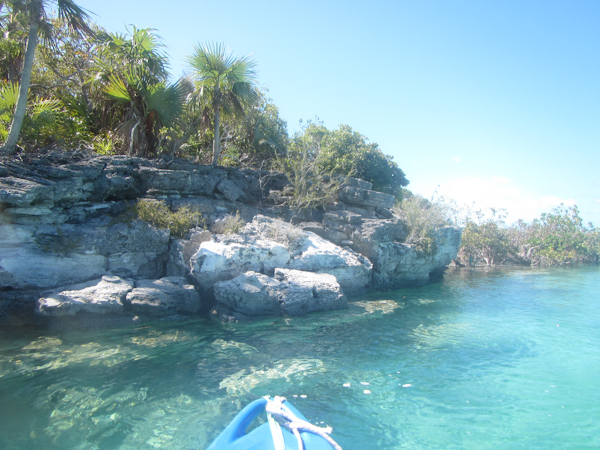 The southern creeks you are only allowed to explore by kayak.

Just before the turn of the tide we start paddling to be in time to be at the mouth at slack tide.

Meeting of two Mavericks “Vagabund and Bosa Nova” in the Bahamas. Something we have been looking forward to do for quit a few years. 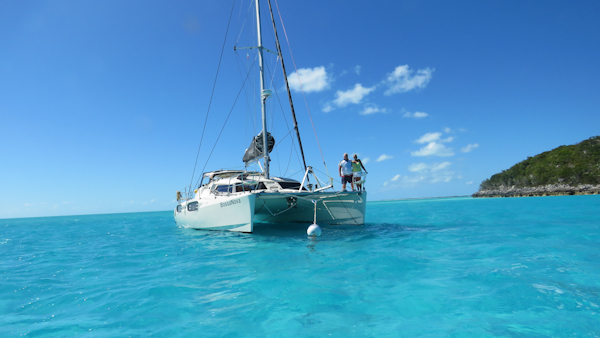 Andreas and Leda on Bossa Nova 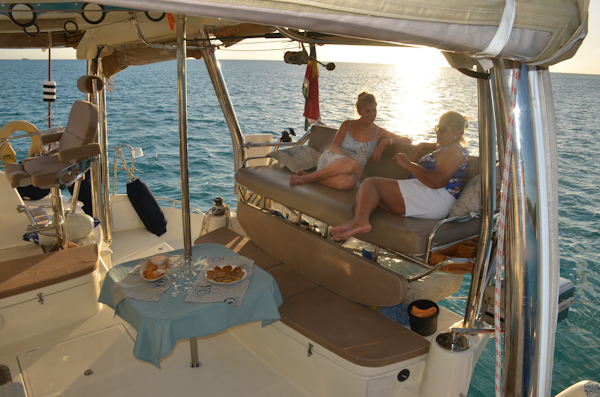 Spending an evening on Vagabund. The lady’s enjoying Vagabund’s bench as the men were in deep discussions on all small improvements both appreciating and enjoying there Maverick’s.

"The North Mooring field at Warderick Wells is one of the most popular anchorages in the Exuma chain. This is the hub of the park, the home of the Park Headquarters. The headquarters has been built in 1989 by Warden Peggy Hall, Deputy Wardens Anita Martinec, Bob Rader, volunteers from Operation Raleigh and some cruising boaters. Operation Raleigh was organized under the patronage of Prince Charles in 1985. On December 1988 the first volunteers from Operation Raleigh arrived to cut trails, put in the foundation and the floor. The second team had the roof on by the end of January and the final group finished the walls. Visiting cruisers assisted by hauling people and equipment in their boats. All in all, it took 140 volunteers the winter and spring of 1989 to finish the building." 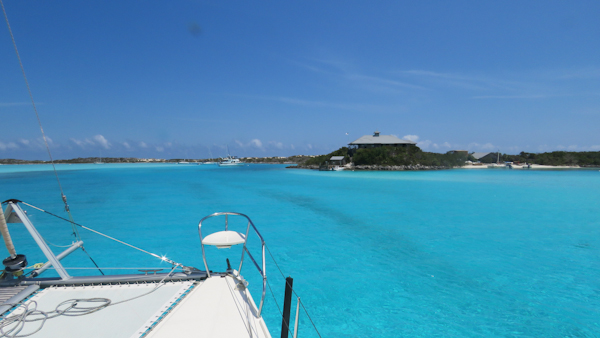 We were assigned mooring no 18 in the North Mooring field. 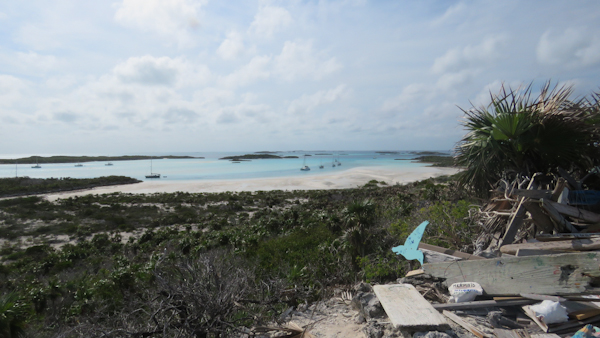 Went for a walk to Boo Boo Hill overlooking Exuma sound on the one side and the park on the other side. At mooring #9 on the bottom is the burnt hull of a fiberglass sailboat. The boat was a 44’ Contessa owned by Fred and Connie Sherman of Miami. They had gone to dinner to dinner on another boat when an electrical fire engulfed the boat. The dinghy was used to access Brad’s Reef on Long Cay where we snorkeled a drift dive holding onto the painter as the current drift us over the reef. The south section had a fear amount of algae growth. There was modest current and abundant fish life. Just west of Mooring #1 is the dinghy mooring of Judy’s Reef. 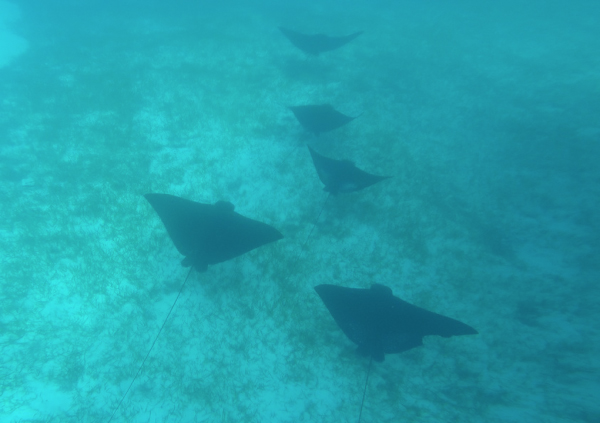 To the west of Hall’s Pond Cay we have done a drift dive over Jeep reef. After that we snorkeled “Pieces of eight” reef that is located just south of Pirate’s Liar beach inside the South Mooring field. A variety of coral heads. 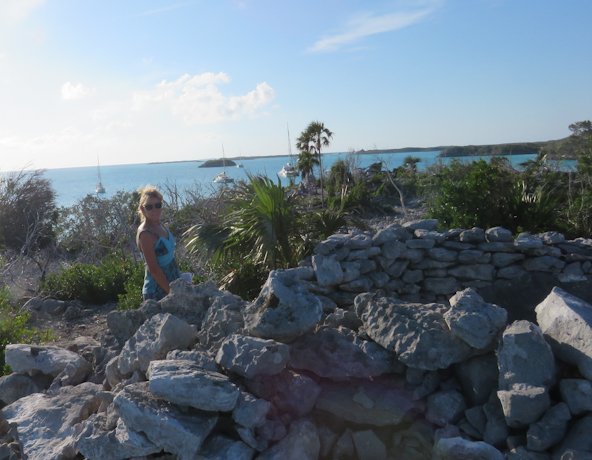 At the southern end of Rendezvous Beach we found the trail to the Loyalist ruins on the western shore of Warderick Wells. The buildings dated back to the 1780 and consist of rock and conch shell mortar walls. 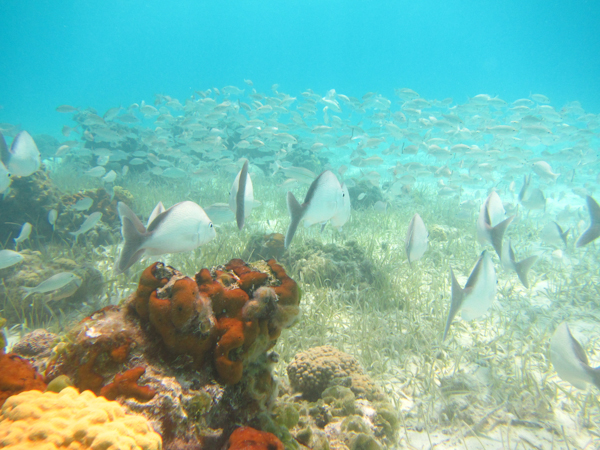 One of the coral heads of Emerald Rock with a variety of tropical fish.

We anchored on the east side of Bell Island with an easy dingy ride to a number of snorkeling spots. 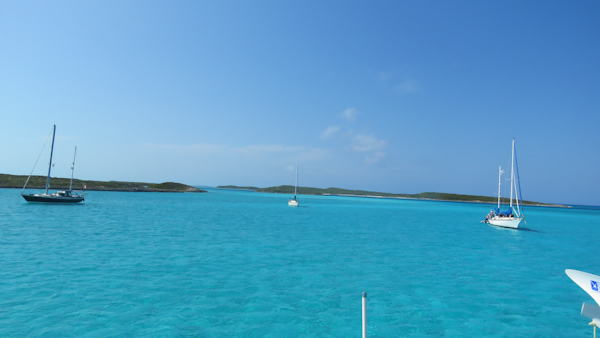 From the anchorage at Bell Island eastern side showing the exit to Exuma Sound on the right and the channel to O’Briens Cay where the Airplane Reef and Sea aquarium snorkeling sites are. 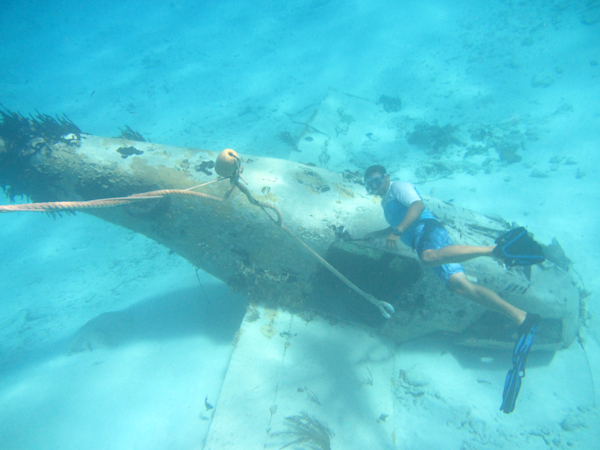 At the Airplane Reef are the remains of a light plane from the 1980’s. 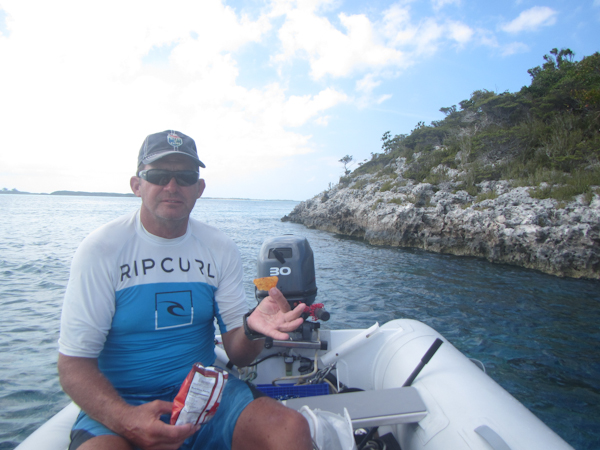 After our snorkeling of the variety of schools of fishes at the Sea Aquarium we enjoyed a cool drink and a packet of nachos. We rather eat it ourselves than feeding the fishes with it like so many snorkelers do. 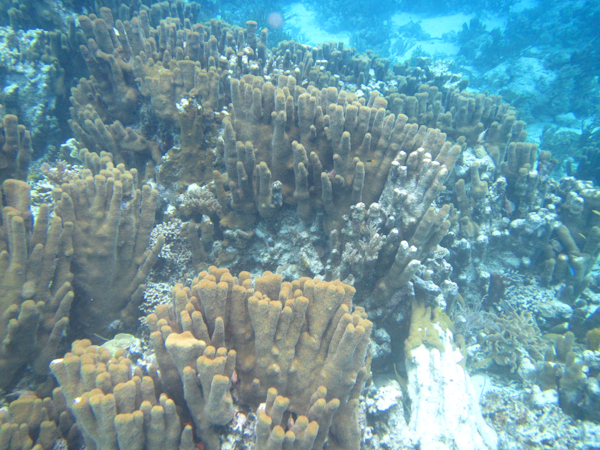 We have drift the Larry’s reef twice. One of our best drift dives. With the second drift over the reef we saw the formations of the rare pillar coral. 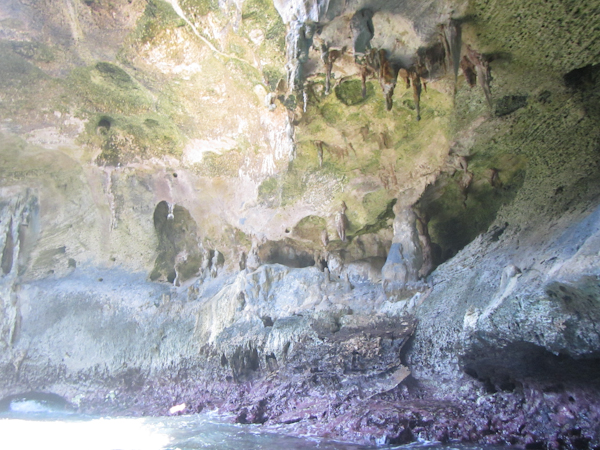 We timed our snorkeling at Rocky Dundas at the turn of low tide in order to enter the two caves safely. Both the caves had beautiful stalactite and stalagmite formations and it is legend that these caves were sacred sites for the Lucayans.