In the Bay in front of New Plymouth, Green Turtle Cay one of our South African buddy sailors Andre and Allison on Rat Catcher managed to catch up with us just before our departure to the BVI. A quick hallo and good buy to Andre and Allison escalated into a detail passage discussion.

Andre agreed to assist with the daily weather updates on our passage. Thank you weatherman.

At sunset we sailed into the Atlantic Ocean through a choppy Whale cut.  Soon after all the excitement of our departure the full moon slowly made her appearance as we were settled into the rhythmic swells of the North Atlantic Ocean. The Southerly Breeze gently helping us along. 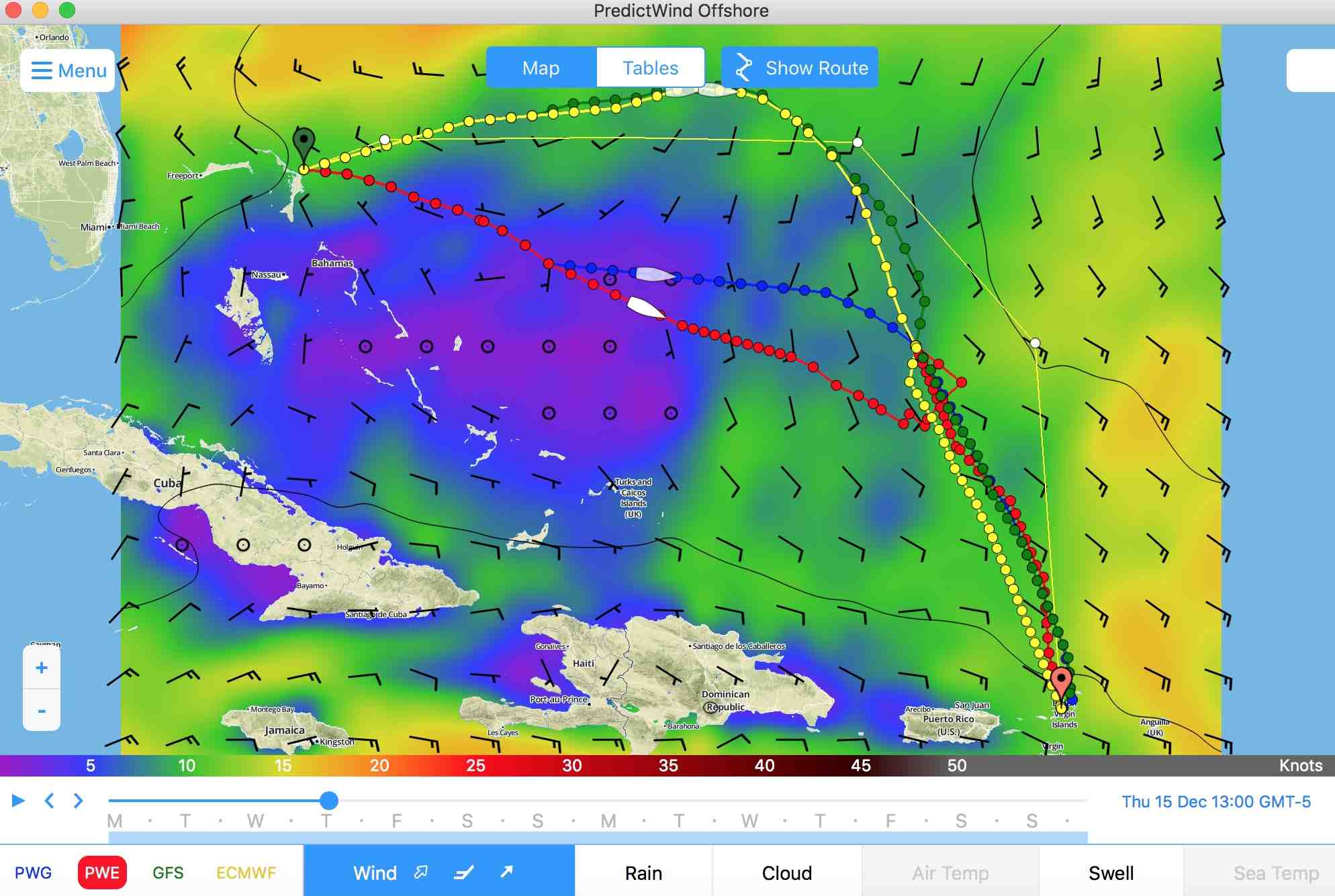 Photo of Predict weather with the different route options.

A Northerly route option was selected that covered a longer distance  but more sustainable winds. The first leg of the 1100nm passage is Eastbound hopefully making enough East before the next cold front. As the cold front set in we bwill use the Northerly winds to propel us down South.  The distance that needs to be covered in a relative short weather window gap requires motor sailing.

After overcoming the opposing currents of the first day we managed to settle in to a steady Easterly progress. Some days we managed to motor sail up to 180 nm with the 8 to 10 kts Southerly breeze. 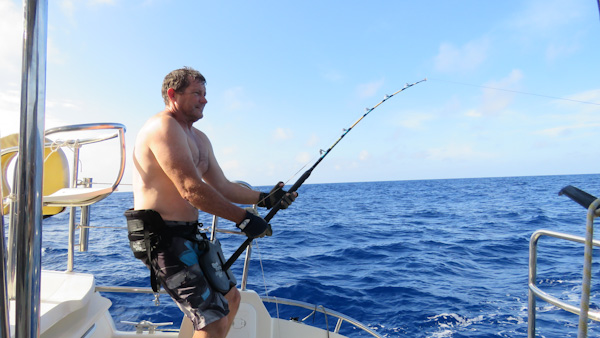 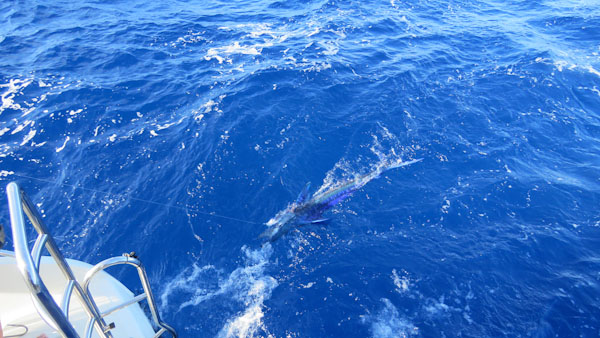 Thursday morning Zack picked up a dead flying fish from the deck. He rigged the fish with a circle hook and a few hours later managed to catch a 20kg White Atlantic Marlin. Unfortunately the fish damaged its spilled stomach during the fight and we could not release her. A wrestling contest before the fish was on the boat 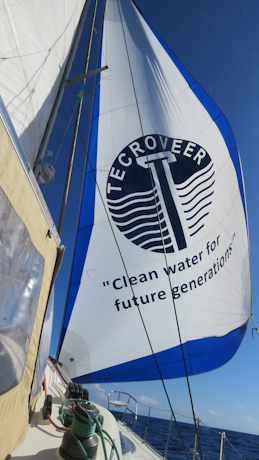 Thursday the wind start to veer. Change from South to Southwest. And then WSW.  Flying our new screecher for the first time we still managed to keep up our Easterly progress with the lighter wind. 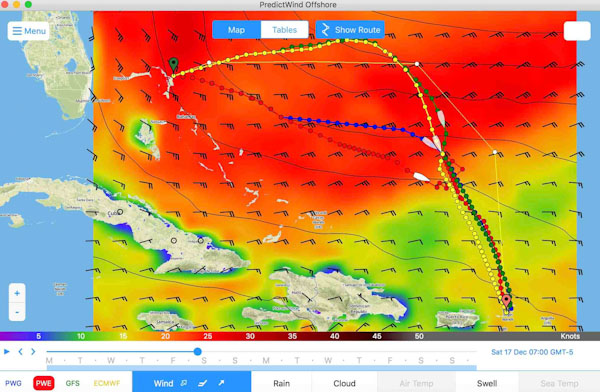 André of Ratcatcher confirm the weather each day with a sms to our satellite phone helping us to make the call when to start heading South.

Friday morning the wind died down from the West. All the sails was dropped and we motored further East prepping Vagabund for the blow that is going to set in with the approaching cold front.  All loose objects in the cockpit were stowed away. Dinghy was tilted and tied up against the stern steel frame. Food was prepared for the next few days. 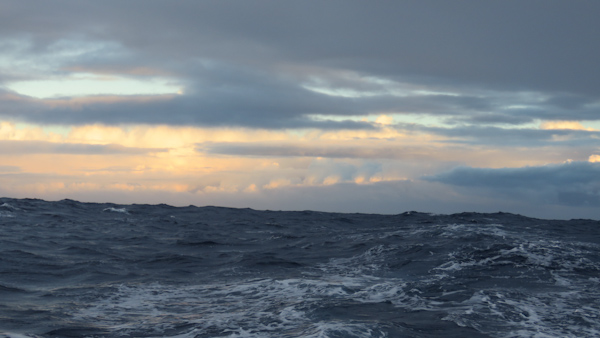 The rolling clouds gave us an early warning as the cold front approaches.  Soon after the smiling sea had a serious frown complemented by 30 to 35 knot wind gusts. The music at this party stopped and the new DJ in charge turned the whole party into a more headshake rock and role show. Vagabund responded beautifully with seawater washing regularly over the saloon windows.

We flew a small headsail and the mainsail with two reefs. 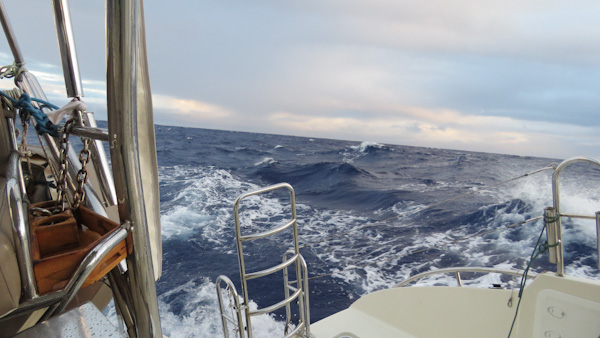 On Saturday at 19h00 we reach the  64deg30W and allowed Vagabund to get a sniff of her new cruising grounds as we rounded her bow towards the South. With the North winds at a steady 20 to 25 knots the sea build up wave heights of more than 3m. A Egrit decided to take a break from the wind and sea and join us for a while. 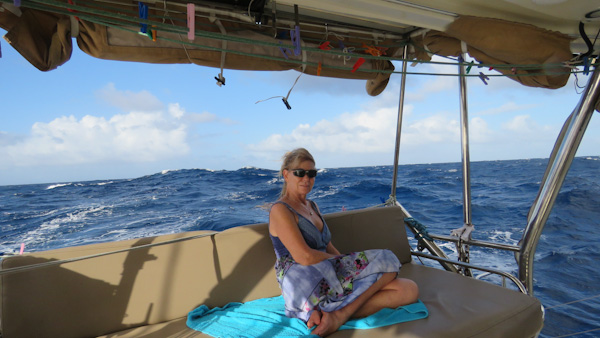 Sunday afternoon we started to slow Vagabund down to time our arrival for early the next morning at Jost van Dyke in the BVI’s.

The water depth changed in a few miles from 6000m to 50m as we approached the banks of Jost van Dyke.  Suddenly we picked up a large vibration on the starboard motor.  We have picked up some lines of a loose floating buoy. The motor was shut down to avoid any  damage.  The 25 knot Easterly assist us in sailing through the cut but beating into this wind with only one motor was not possible. With humor we discussed the problem and solution:

We ended up sailing across the Sir Francis Drake Channel tacked and managed to gain enough ground to make the entrance of Great Harbour of Jost van Dyke.  The fun part now was to sail onto a mooring buoy in a field filled up with boats in a strong breeze. Something we have not done since our RYA training at Sail Due South and certainly not in a catamaran. 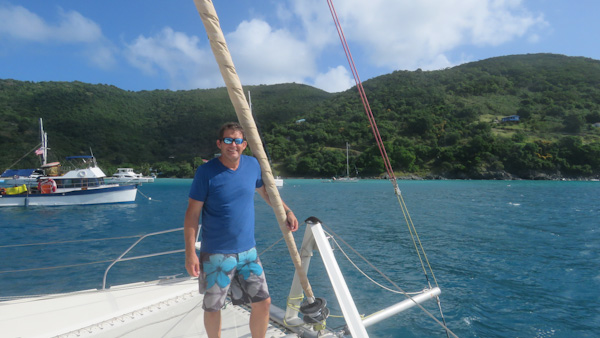 We took down the headsail, and sailed into the harbour with the mainsail. Zack timed the swing into the wind perfectly allowing me to pick up the mooring ball. After securing her we looked with pleasing smiles at each other. Jaco you have taught us well. Zack used the opportunity to cool down by diving into the warm tropical turquois water to cut the mooring line around the prop. Wala!!! We have a starboard engine again with no damage. Thankful that we are safe and sound in the BVI’s. Clear in at customs, a well deserved meal at Foxy’s and then sleep for a few hours.

The season lies ahead of us with one bay at a time.