Passage to BVI and BVI

After leaving St Martin we set our sails and were spoiled once again with a beautiful sunset on our way to Virgin Gorda in the British Virgin Islands. It was a calm night and with the light breeze we motor sailed with the mainsail and genoa. 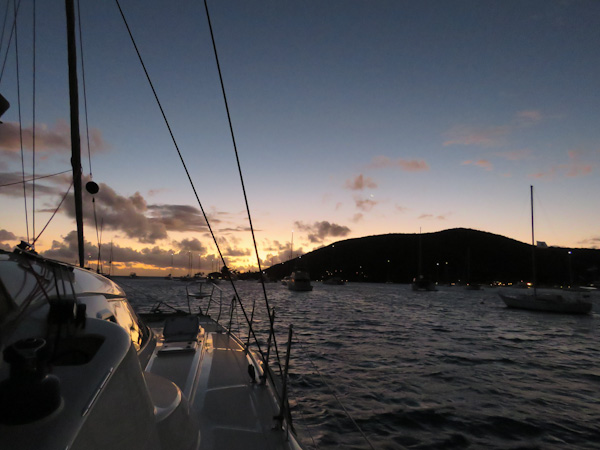 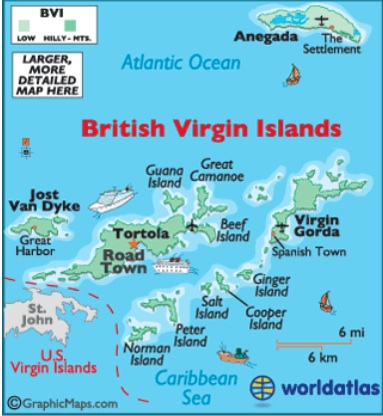 “The Virgin Islands are an archipelago comprising hundreds of small islands and cays situated between Puerto Rico and the Leeward Islands. The eastern half is a British dependency, while the western part is US territory.

The largest British islands are Tortola, Virgin Gorda, Jost van Dyke and Anegada, the latter being slightly set apart, while the former are grouped together around the Sir Francis Drake channel.

The Virgins are perfect cruising ground - scenically beautiful, with countless bays, coves and anchorages, the waters sheltered from the strong trade winds and ocean swells.

The British Virgins are now the largest bareboat charter centre in the world. For this reason they are often less attractive to the long-distance cruising sailors, who prefer the less crowded islands of the Caribbean.

Tortola (Spanish for Turtle Dove) is a lush mountainous island. Crowning Tortola is Sage Mountain National Park, a semi-rain forest which, at 1710 feet, is the tallest peak in the islands. It is also the vibrant hub of the financial and government sectors with Road Town "The Small Town with a Big Heart" as its capital.”

Early the morning we arrived in Gun Creek Bay of Virgin Gorda. With only one boat in the bay there was plenty room to anchor and visit customs and immigration. We tied our dinghy on theleft side of the government dock just beyond where the local ferries land. 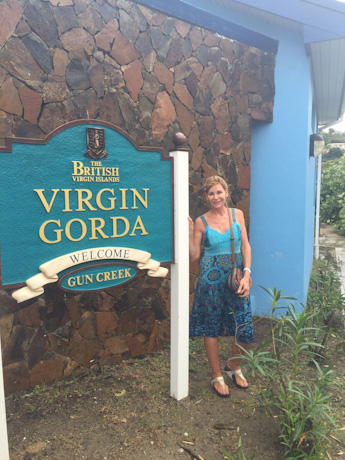 With the paperwork in hand and after clearing into BVI we motor across the bay to Sabor Rock and anchored close to the beach. It was pouring down with rain and we spend a lazy day on Vagabund, recovering from the previous night sailing.

At Saba Rock we enjoyed sundowners and there free Wi-Fi. A thrill was watching the feeding of  tarpon at 5pm. They were even jumping to catch the piece of fish before they could touch the water. Aggressively competing among each other. The feeder would hold onto a piece of fish while a tarpon will grab the fish engulfing his whole hand. 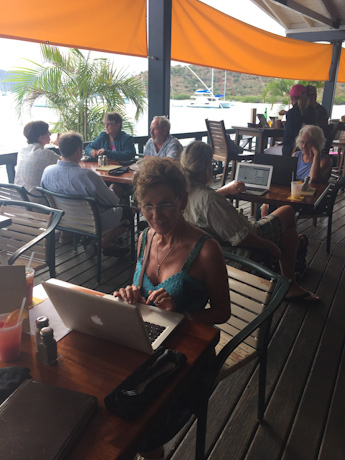 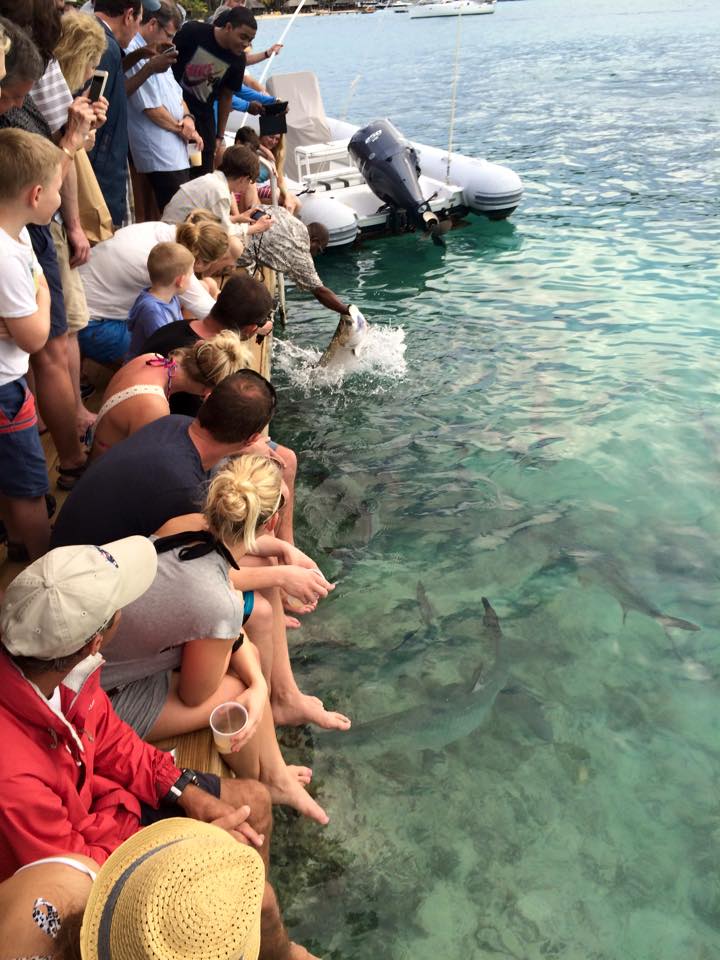 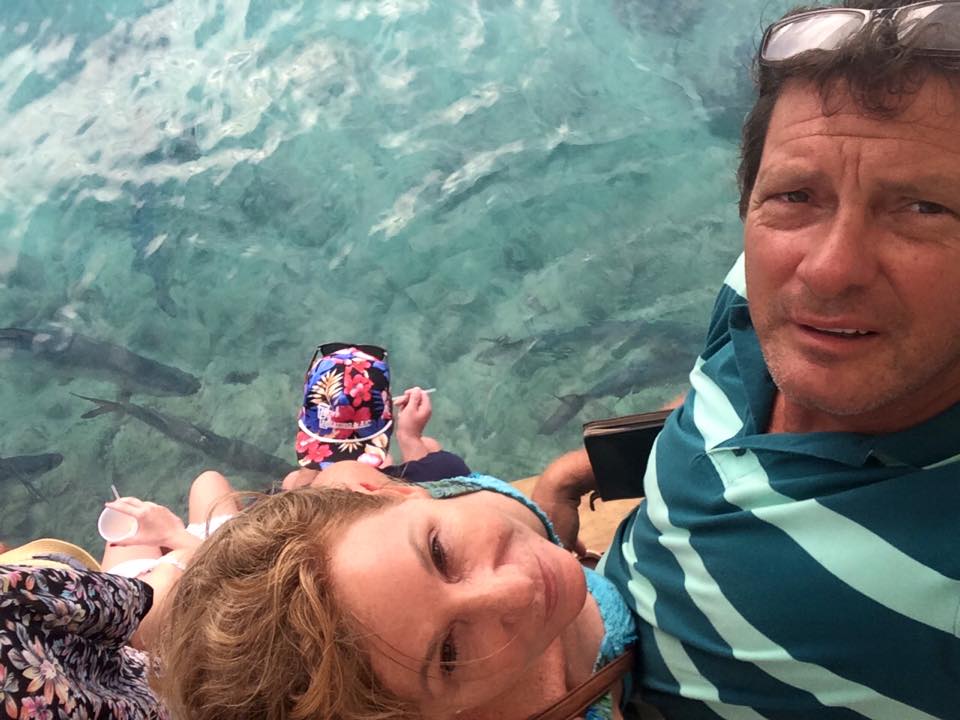 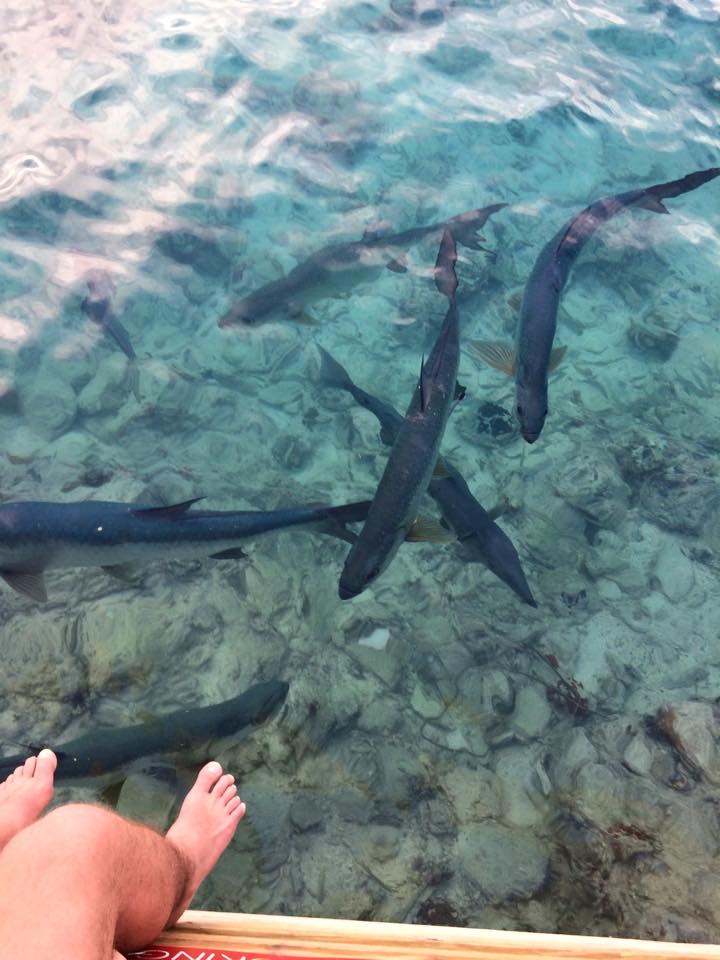 Early the next morning we picked up the anchor and set sail to the Southwest side of Virgin Gorda to “The Baths”. The swells were big and on arrival at The Baths red flags were raised on the beaches as the breaking waves made it impossible to safely land a dinghy on the beach. We could only take photos while we motored past.  The beauty has to be saved to be explored another day. 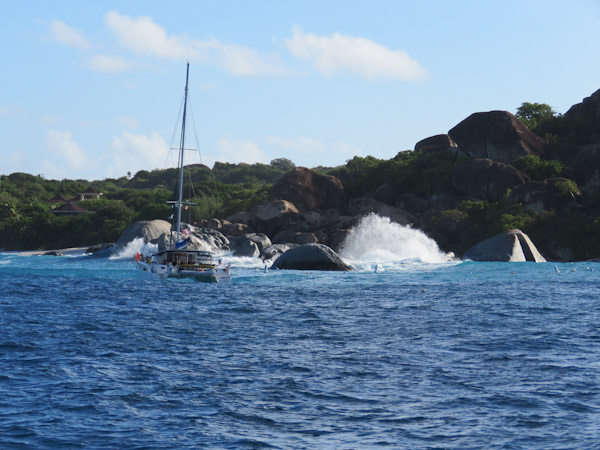 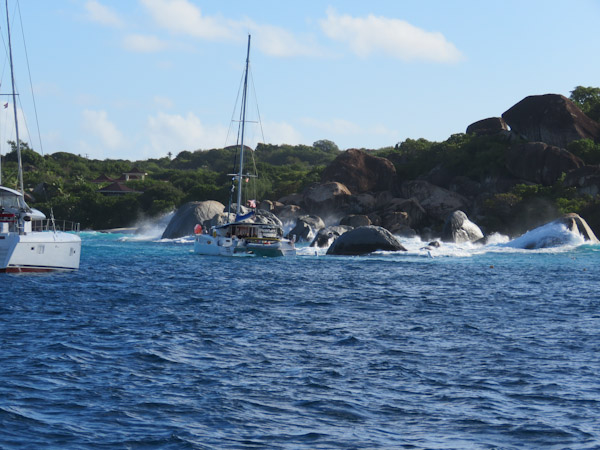 Diverting to Tortala Island and picking up a mooring in Trellis Bay. It is a charming little bay close to the international airport. It is just a five minute walk from the dingy dock to Beef Island Airport.

With a taxi we arrived at the B&F Medical Complex, trying to use a South African prescription at the pharmacy but I have to see the doctor to issue the same prescription. The friendly nurse at the clinic offer to took us to Road Town in her lunch brake. At Digicel we bought a data card and walked back to the Pasea district where we stock up on fruit and red meat at Cash and Carry and Rite Way. The prices even better than in Trinidad that is the cheapest in the Caribbean. On our must do list were lamb chops for a barbeque!!! 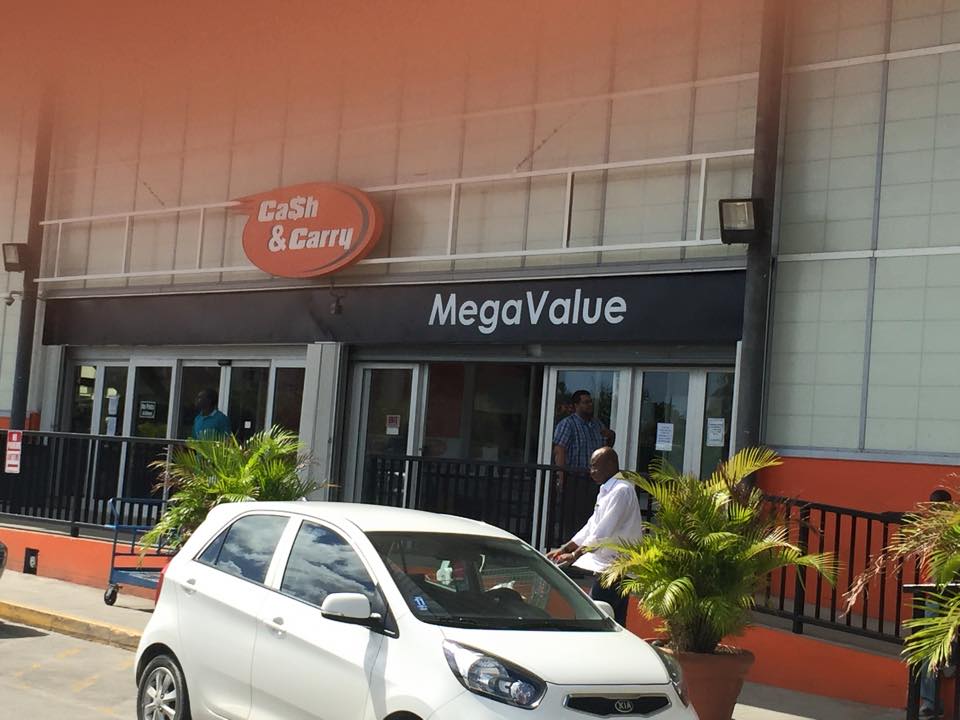 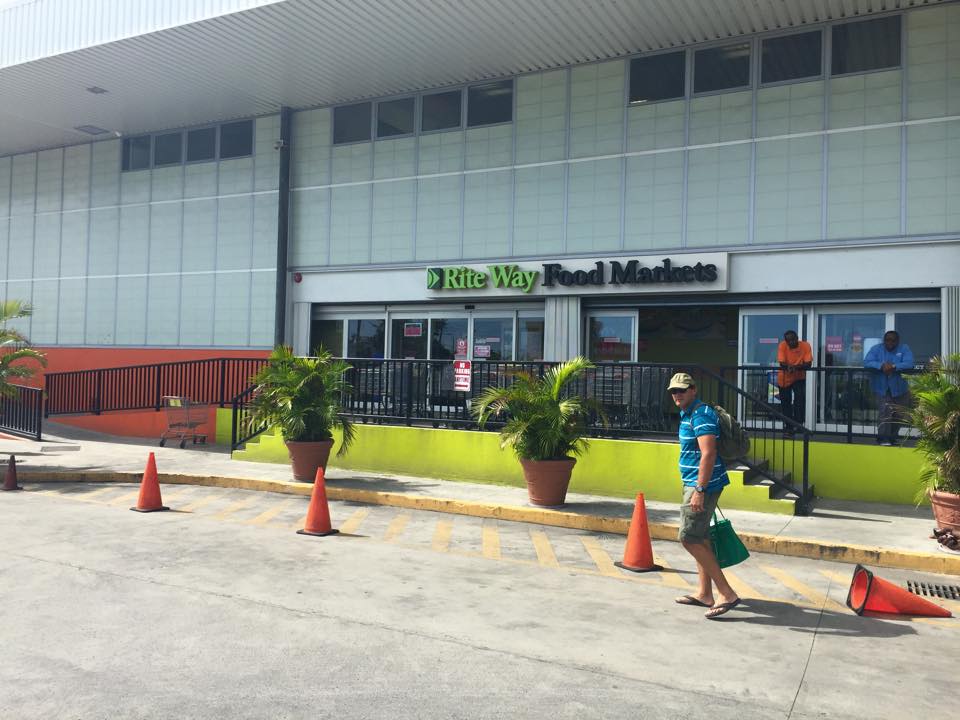 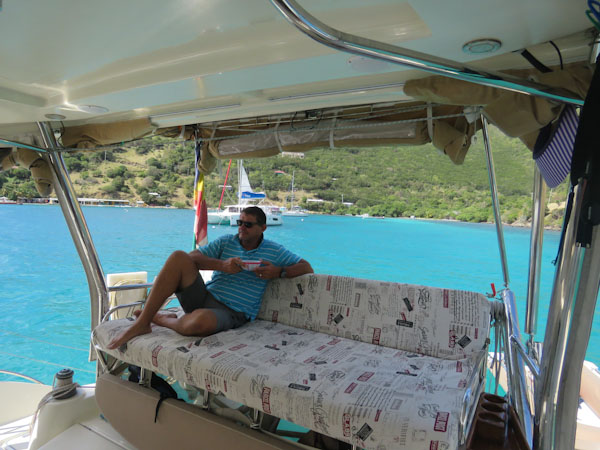 Zack gets a hair cut from me. 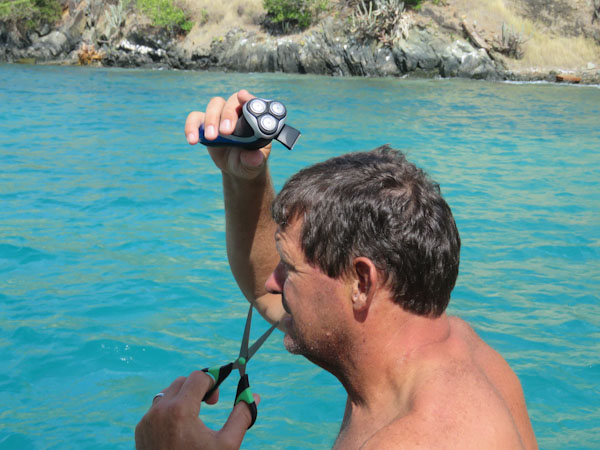 The wind was still blowing at 20 knots and our early kayaking was a challenge. With our 15Hp Yamaha on our dinghy we motored over to the next bay at Great harbor to clear out at customs. With all the boats in the bay there were a lively vibe in the air. 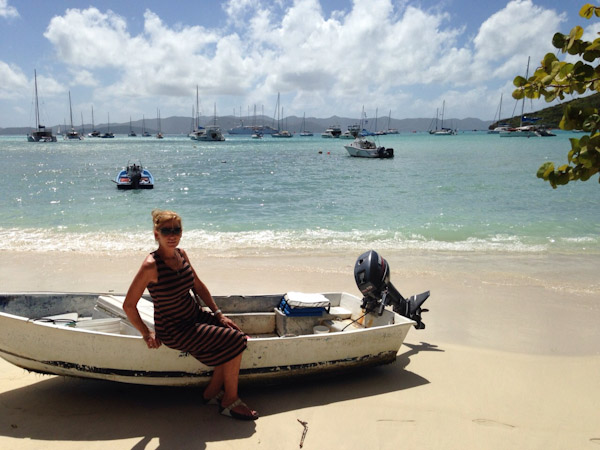 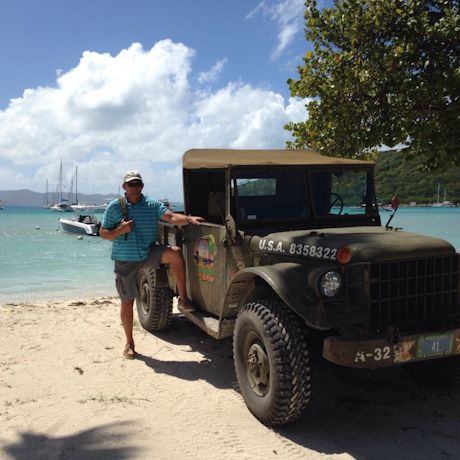 At Rudy’s supermarket we found biltong and chutney imported from South Africa. It was not cheap but if you do not have any then you pay what they ask. 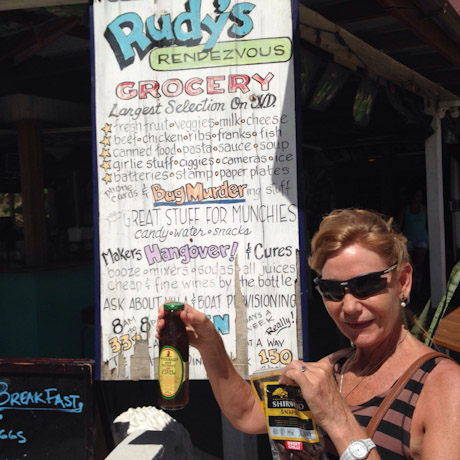 We ate lunch at Foxy’s – a cross between a restaurant and a massive waterside food stand. It was a long ride back with the dinghy beating into a 20knot wind. While trying to unhook our mooring line and extra safety line to the concrete plinth the mooring line attaching Vagabund slipped loose. Zack was still in the dinghy. I had to scramble to switch on the motors to keep us of the rocks on a close lee shore. Never a dull moment on a sailing vessel.

The time in the BVI’s was more a quick reconnaissance type visit and we would like to return again someday to spend more time exploring the islands.

We set sail to St John in the USVI.