Three o’clock Sunday morning (8th March) we started our sail to Long Island with an overnight stop at Crooked Island. A passage of 75 nm to Crooked Island.

Downwind with the G2 was making this trip an easy sail.

This trip was a fishing festival. Two Dorado’s strike at the same time. Double up. Zack brought the one in while I reeled in the other one. A bull and a female caught by the Captain and First Mate. 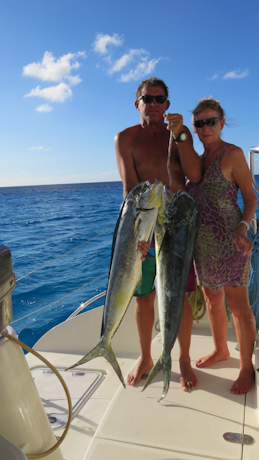 A Barracuda found one of the lures interesting. After lunch a white marlin took a lure. Zack decided it was my turn to bring her in. It was a bit of a scramble to get the other three lines in as well as the teasers. We then had to slow down Vagabund by bringing the A-Symmetrical spinnaker down. The fish gave a good fight. I did not want to hold her, so Zack volunteered to give her a hug before releasing her to grow bigger. 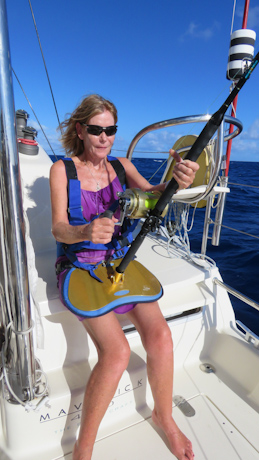 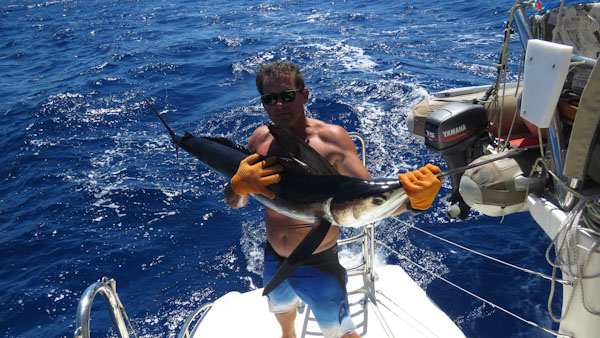 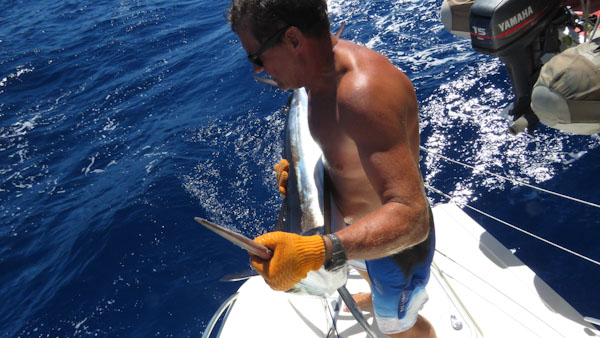 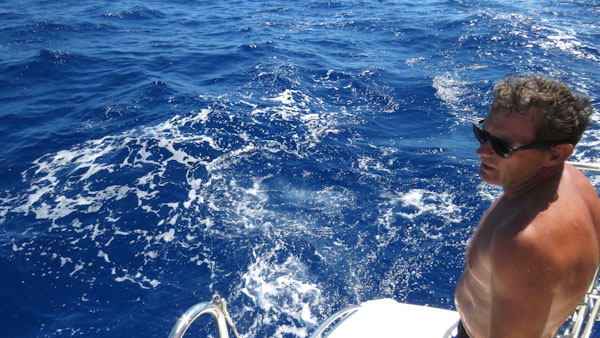 Late in the afternoon we rounded the NW point of Crooked Island and could enjoy a nice few of the Light House. We managed to anchor about half a mile from the town on the narrow sand ledge close to the drop off. Right in front of our boat was a funny white dome shaped holiday house. 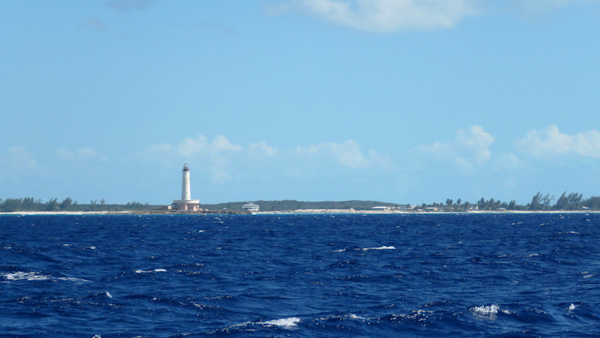 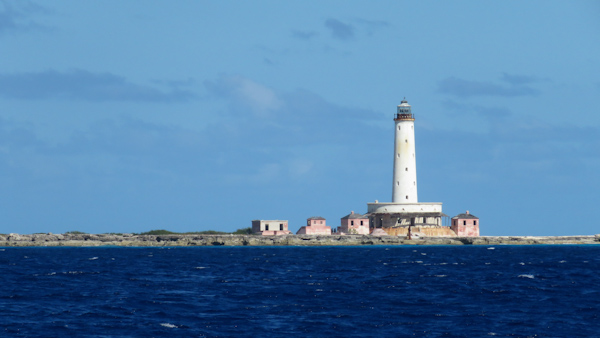 Zack cleaned the Dorado at the back of Vagabund. With the carcass of the first Dorado two sharks of different species came to feed. With the second carcass three sharks appeared in minutes out of nowhere to tear it apart. It can only be assumed that the smell of blood spread so much better because we where so close to the drop off. I was glade I have already dived the anchor a half an hour earlier. The barracudas underneath Vagabund made sure that the rest of the cut off where swooped up long before the sharks could make their appearance again. 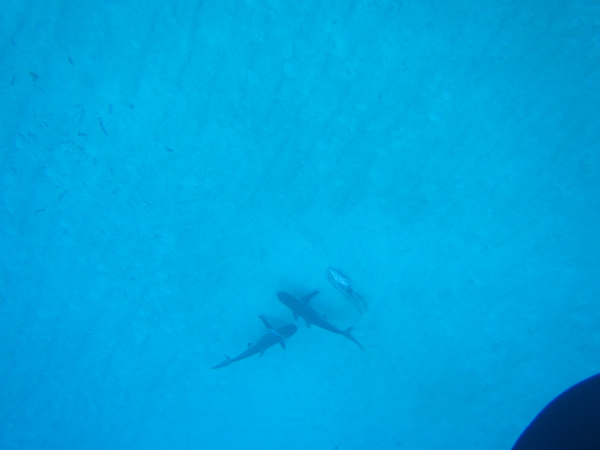 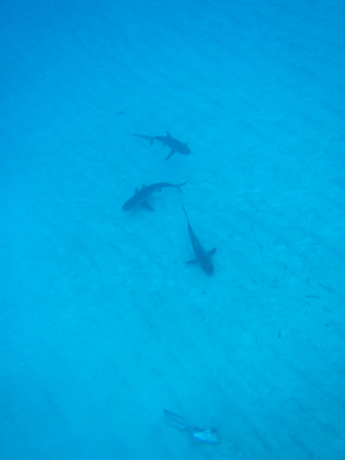 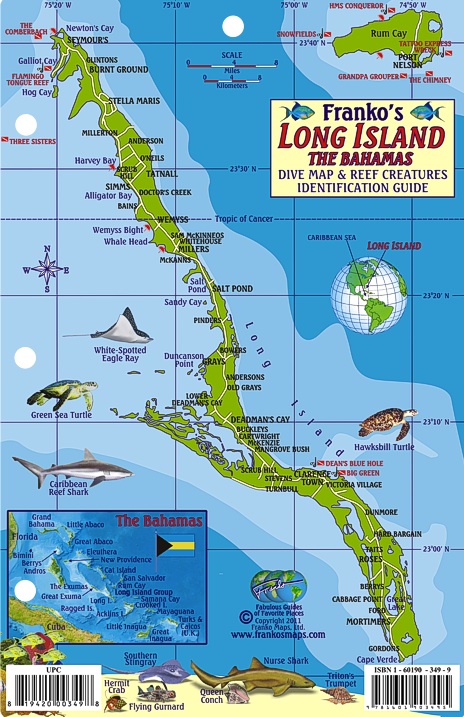 “Long Island, like Eleuthera and Cat Island, has an ocean coastline to the east, which offers deep-sea fishing (1000m water depth is less than three nm from shore) and one or two anchorages in suitable weather, including Clarence Town. The west side offers shallow water cruising with interesting settlements, creeks and bays to explore.”

The anchorage behind Strachan Cay had less roll than the rest of the anchorage.

Scattered coral and lots of grass and we had to watch out for the submerged cables. The anchorage was beautiful and we were comfortable tucked inside with the Easterly’s gusting up to 25 kts. 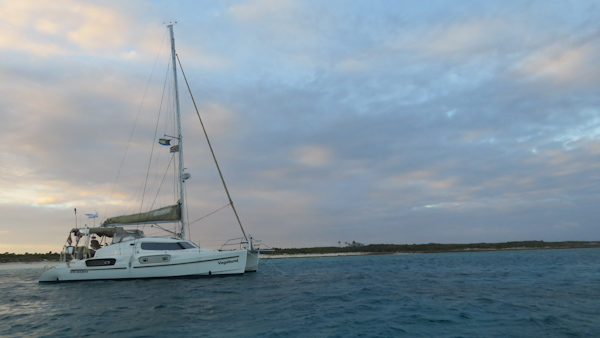 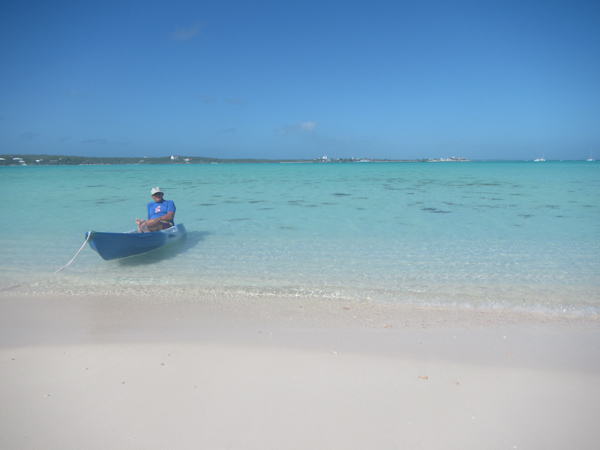 Tuesday afternoon we explored Clarence Town. The view from the white church in town was awesome. 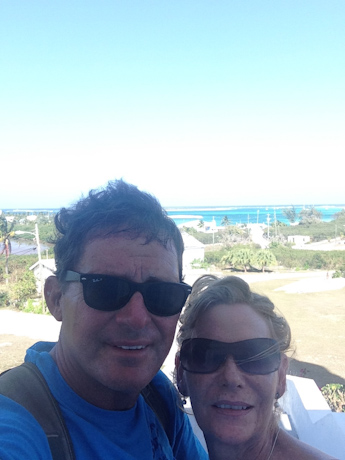 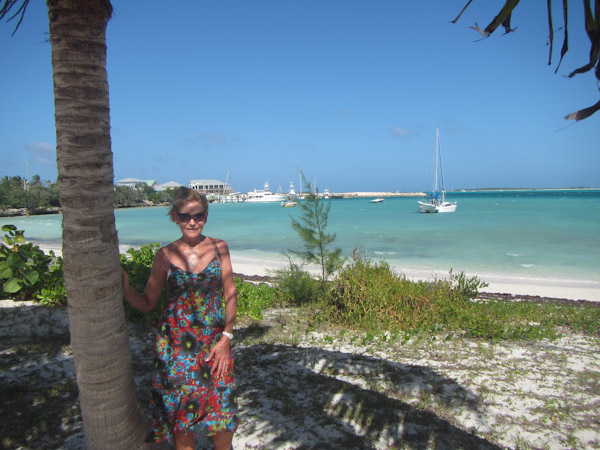 We rented a car for Wednesday and went exploring with our friends of Del-Max. 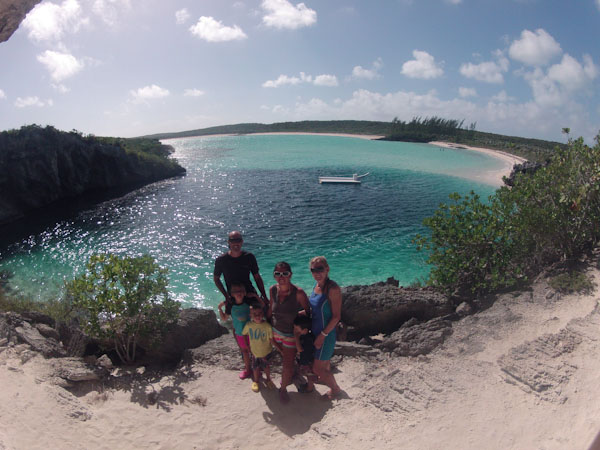 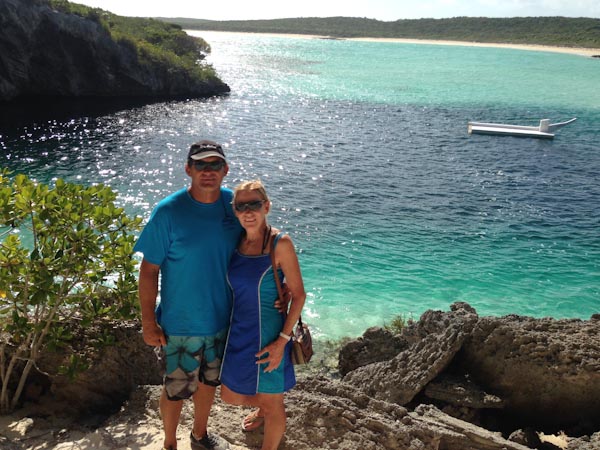 "Dean's Blue Hole is the world's deepest known salt water blue hole with an entrance below the sea level. It plunges 202 metres in a bay west of Clarence Town on Long Island, Bahamas." The deep blue color is caused by the high transparency of water and bright white carbonate sand.

We scuba dived the hole. Dropped of to 30 meters along the free-divers platform and depth lines. At this depth the hole started to open up. The torch was switched on as the light faded away. Soon it felled like a cave dive. The sand falls constantly in on the side of the walls creating a unique sand-water fall effect.  We had to watch our bottom time because of the depth of the dive. Zack saw a Tarpon at 30m and I had to stop him from swimming deeper down with it.

Because of the top of the hole being under sea level plastic bags floating in the ocean somehow manage to get trap inside the hole. They are all over in the water and against the sidewalls of the hole. We collected them as we dived. There were a limited amount of reef fishes. At six-meter decompression depth there is good caves, overhangs and fish scenery.

Later the day we went to the Hamilton’s caves. Our guide Leonard Cartwright was driving in front of us in a school bus. It is owned and operated for generations by the Cartwright family. The Hamilto's caves have many passages, which are a least 50 feet wide with a ceiling of 10 feet wide. It is one of the largest in the Bahamas. The Lucayan Indians lived here about 500 AD and many Lucayan artifacts were discovered in 1936.  Bats of different species hang out in the caves. 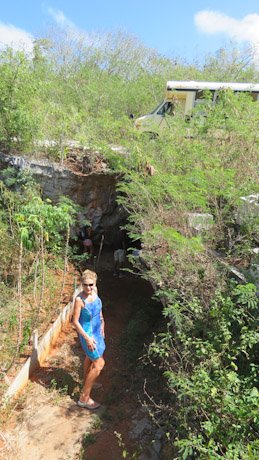 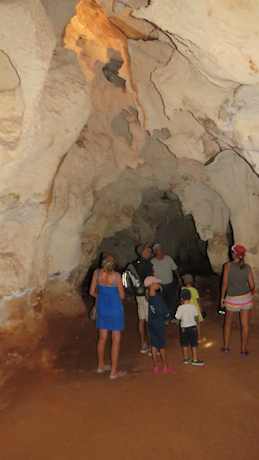 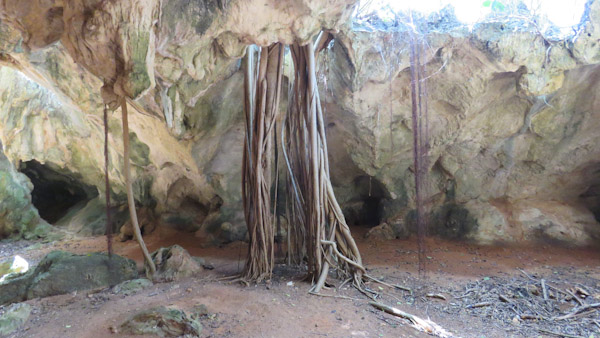 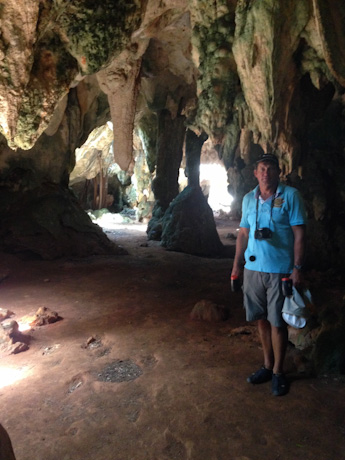 Thursday 12th March we sailed along the windward side of Long Island to Calabash Bay. It was an uncomfortable sail with the waves on the beam. A big blue torques bay that looks like a big swimming pool. 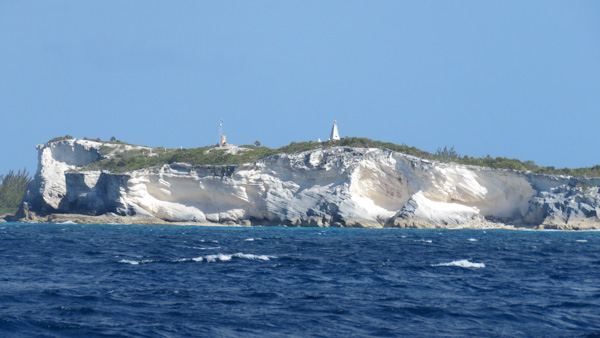 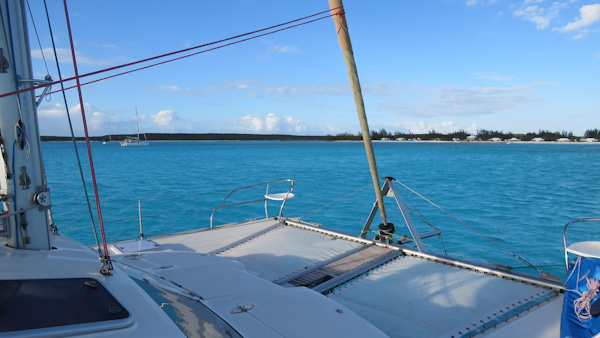